Weekend in the Berkshires

What's everybody doing this weekend?  I mean seriously, has anyone taken a look at some of the events going on in the Berkshires?  The farmers markets are starting, estate sales abound, the museums are hopping with their newest exhibits...

I am taking my daughters to see Rhythmic Circus at The Colonial Theatre in Pittsfield, and I. CAN'T. WAIT!  I mean what's not to love about dancing (like tap dancing on steroids, from what I hear) and percussion instruments TOGETHER?!?!  In fact, The Colonial's website reads something like this,

"There’s tap dancing and then there’s Rhythmic Circus, the percussive-dance phenomenon that features a variety of musical flavors, from Minneapolis funk to salsa, and enlivened by a seven-piece band, vocalists and a beat-boxer."

(Okay, so The Colonial's website reads exactly like that, since I just copied and pasted that part.)

So I think that looks like a really fun night, and for two little girls (and one big girl!) that get really pumped by funky music with a great beat and CRAZY dancing, I think it's a no-brainer. 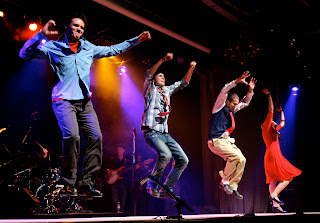 And speaking of no-brainers (well, kinda...I just said it right there ^), I think that all too often people come to the Berkshires expecting that going to the theatre means listening to a symphony, or seeing the opera, or watching ballet. But TRULY every taste is represented here.  And The Colonial, among other places, has SO MUCH to offer, but I think sometimes people who aren't the "artsy-phartsy" type are NEEDLESSLY intimidated by some of the amazing local venues we have.

So if anyone is looking for the Consolati girls tomorrow night, you know where we'll be! (Probably kicking up our (my) heels in the aisles...my girls will be mortified...a win-win situation!)

Til next time!
Posted by Tara Consolati at 1:15 PM

Tara Consolati
Founder and Creative Director of Tara Consolati, marketing + pr. Lover of fine things--great design, great food, beautiful locations, the arts. Passionate about the Berkshires. Wife and mother of two (plus one dog and four cats!). Addicted to Pinterest and Twitter! Follow me @taraconsolati. Excited about what the future holds!